I love my Food and Wine Magazine- I get so excited when I open my mailbox and there is a brand new issue in there full of new recipes to try. I mainly look at the recipes, the hubby likes to look at the wines and try to find them at the stores.
The first recipes I always look at are the dairy free ones. And in my last magazine I came across this delicious looking chicken recipe that I knew I had to try. It had all our favorite things in it- chicken, red wine, onions, garlic, ginger, tomatoes. It just looked too good to pass up. So I added it to our menu for this week. I was supposed to make it last night but I made a last minute adjustment to our menu and saved it for tonight. In other words- I didn't feel like cooking last night and made something easy *GASP!

This was not a hard recipe but it was a little time consuming and had several steps. I will definitely make it again, but with a couple changes that I will add at the end.
Active cooking time: 30 minutes Total cook time: 1 hr. 40 minutes.
Serves 6
Ingredients:
3 Tablespoons Canola Oil
6 boneless skinless chicken thighs (** The recipe actually calls for chicken legs, but I do not like chicken legs so I used thighs instead**)
Salt and freshly ground pepper
1/2 teaspoon cumin seeds
2 large onions, thinly sliced
3 garlic cloves, smashed
2 tablespoons freshly grated ginger
One 3-inch cinnamon stick, broken in half (**I didn't have any cinnamon sticks- thought I did but I did not, so I used 1/2 teaspoon ground cinnamon)
1/2 teaspoon crushed red pepper
2 bay leaves
1 cup dry red wine (We used Sterling Vintner's Collection Cabernet Sauvignon 2008)
1 cup chicken stock or low sodium chicken broth
One 28oz can whole tomatoes, chopped with their juices. ( I left them whole because I like them better that way) 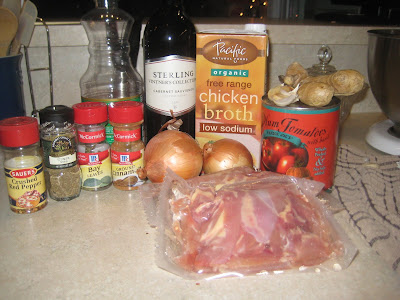 Directions:
1. In a large, deep skillet, heat 2 tablespoons oil until it is shimmering. Season with chicken with salt and pepper and add to the skillet. Cook over medium high heat until browned. 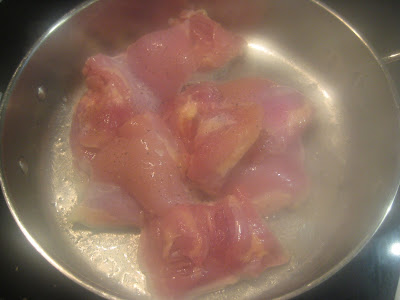 Transfer the browned chicken to a plate. Pour off fat in skillet. 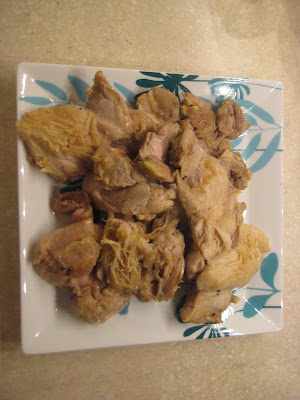 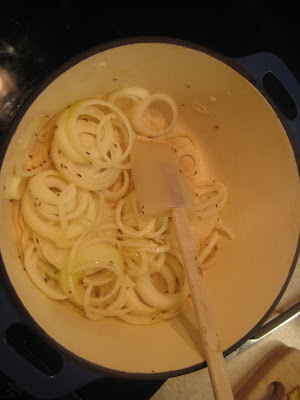 Add the garlic, ginger, cinnamon, crushed red pepper, and bay leaves and cook, stirring, until the garlic is golden, about 3 minutes. 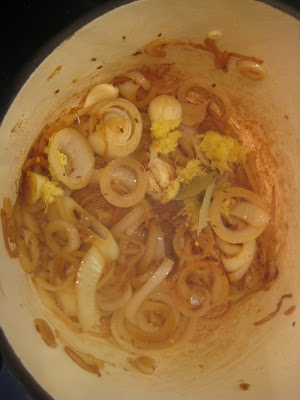 Add the wine and simmer over moderately low heat for 5 minutes. 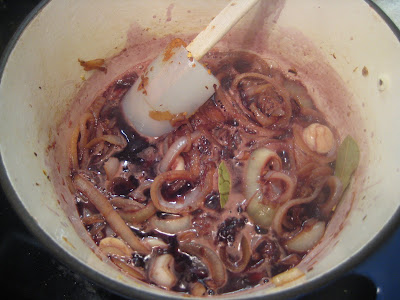 Add the stock and the tomatoes with their juices and simmer for 10 minutes. 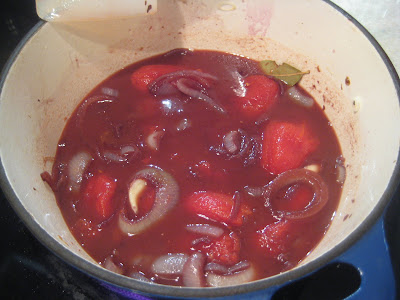 3. Add the chicken to the sauce along with any accumulated juices and simmer over low heat, turning a few times, until the chicken is cooked through and the sauce is flavorful, about 50 minutes. 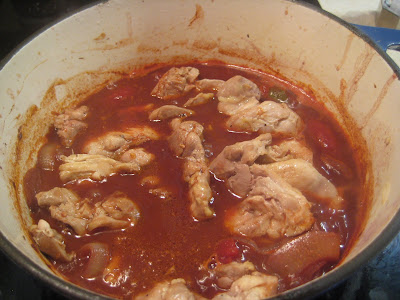 Right when chicken is added 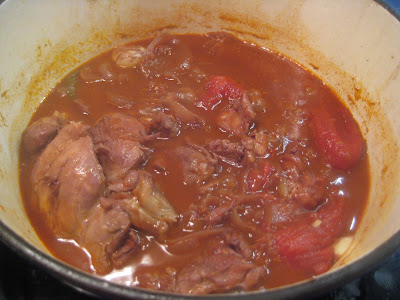 50 minutes later- it absorbs the sauce.
Discard cinnamon stick ( if used) and bay leaves, season with salt and pepper, and serve over white rice. 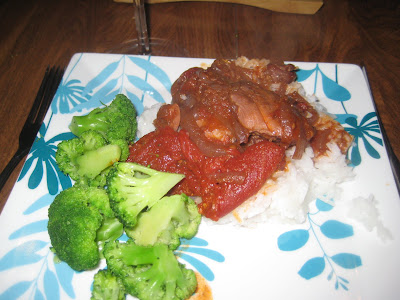 Next time I will add some baby portobello mushrooms during the last 20 minutes of cooking.

This is not really a kid friendly recipe but you can easily save a couple pieces of chicken for them and let them have the plain chicken with the rice and veggie. Or in a small pan you could simmer the chicken with some diced tomatoes or tomato sauce instead- omitting all the "adult" flavors.

Recipe from Food and Wine Magazine
Happy Cooking!
Posted by Steph at 7:34 PM