Don't look now- it's another squash recipe! It's definitely squash season in our area, and we've been getting a lot from our CSA the past few weeks. Not that I am complaining at all- I happen to love squash. And so does our youngest daughter!

Last week we got some beautiful 8 ball (Or round zucchini) squash. They were absolutely perfect. I didn't want to just chop them up and throw them in something. I wanted to try something different with them. So I got online and started searching for recipes. I came across several stuffed 8 ball squash recipes. Some were very involved- using several ingredients I didn't have on hand. So I searched through my cabinets and came up with my own recipe.

I only used 2 of the squash because I was sure the kids wouldn't each eat a whole one. They ate the mixture we stuffed them with instead. 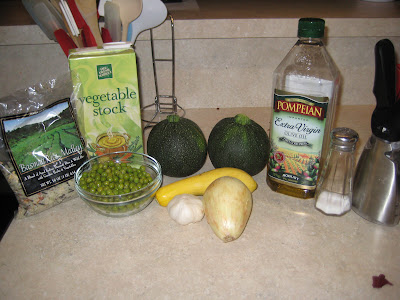 You'll notice a yellow squash in the picture- I ended up not using it.

Directions:
Preheat oven to 350F.
1. Start cooking the rice first, since it takes the longest. Instead of using water, I used vegetable stock for more flavor. Follow the directions on the package 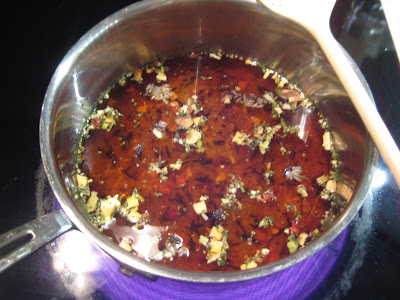 2.Prepare the squash. Cut the tops off, then cut the squash out in cubes. Set aside because you will be using this in the veggie and rice mixture. 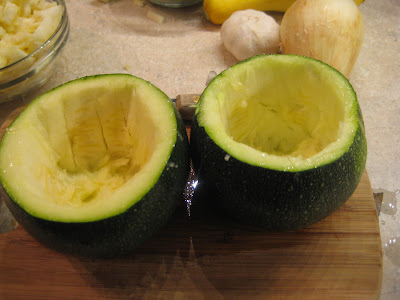 3.Start preparing your veggie mixture: Preheat a skillet and add 1-2 tablespoons EVOO. Add your diced onion and pressed garlic. Let cook until the garlic becomes fragrant. Add the peas and squash. I added a little dried Rosemary and dried Thyme at this point. I would had used some fresh from my garden but it had been monsooning for a couple hours, and we were having quite the storm while I was preparing this.
Cook until the onions and squash soften. Once the rice is cooked, add it to the veggies and combine well. 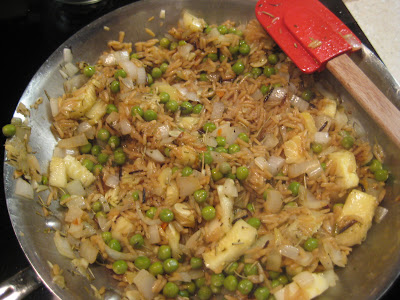 4.Put the squash in a baking dish. I spray the baking dish with olive oil spray to prevent sticking. Brush the insides with a small amount of olive oil, and sprinkle them with salt and pepper. 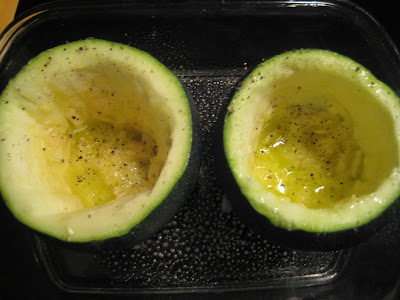 Fill them both with the rice and veggie mixture: 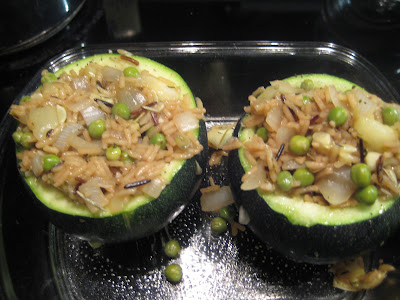 And put the tops back on: 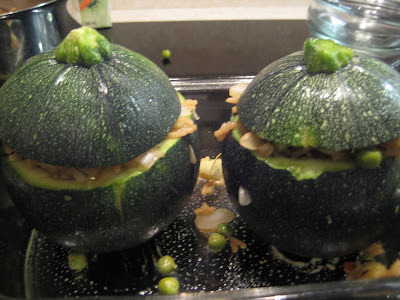 5.Bake for about 20 minutes, or until the squash is fork tender. 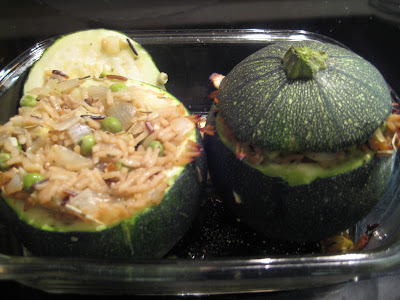 You'll be able to tell when it's done- the outer skin will be a tad darker than it was before it was cooked.

We served ours as the side dish to Slow cooker Braised Short Ribs (that recipe will be posted as well.) My husband and I both agree that the rice and veggie mix tasted like Thanksgiving stuffing- it was so good!

We always teach our children not to play with their food, but this time my husband just couldn't help himself. 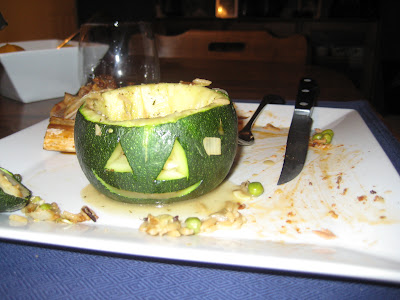 And then he ate his masterpiece:-)
Posted by Steph at 7:02 AM