Kicking the Habit ~ the Soda Habit

I don't smoke, I have NEVER tried any sort of illegal drugs, I do drink alcohol but only in moderation- and not liquor. But I do have one addiction that started back when I was in high school- Soda. Pop, Coke, Tonic, Soda- whatever you want to call it. Diet Coke used to be my biggest vice- in college I drank more of that than anything else. I wasn't a coffee drinker so my caffeine came from my soda. First thing I would grab in the morning was a Diet Coke out of my mini fridge. I'd have soda at lunch too, and then grab another out of the vending machines on the way to my afternoon classes. You'd seldom find me without a soda- I always had a spare tucked in my bag. Looking back I know it was incredibly unhealthy of me but I was young and just didn't care. (I also lived off Taco Bell, Easy Mac, and Ramen Noodles- what was I thinking??)

Back about 5 years ago my husband and I learned the side effects of Aspartame, as well as the dangers of it. One of the most notable side effects for me was migraine headaches. I've always been prone to headaches, but starting in my last year of college I started getting horrible migraines. As soon as my husband came across the aspartame research, he suggested I stop drinking diet soda to see if that helped. Guess what- my headaches went away! I was actually able to give up soda at that time because I felt better. And we eliminated aspartame from our diet. We don't buy anything that contains it.

When I started having my health issues caused by my severe lactose intolerance, I dropped a lot of weight fast. I'm talking A LOT. I'm small to begin with so dropping 20lbs in the matter of a month is a lot. (Yes I went to the doctor, yes they kept tabs on my weight, I was on meds for GERD, and it all got straightened out-once we knew it was the dairy causing it all). I did have a hard time finding things to eat when we went out, and I would get sick feeling fast if I was hungry, so I started grabbing those mini cans of coke to take along with me. Those and a pack of almonds and I was all set. Of course, that got me back into my soda addiction- although this time was regular Coke. My husband is well aware that if there is soda in the house, I WILL drink it. So we had to stop buying them. I allowed myself to have 1 or 2 once a month ( at "THAT" time) but that was it.

Recently we had a huge party at our house and bought Pepsi and Sprite to have for our guests. Guess who has been drinking the leftovers? Me. Guess who put on a couple pounds in the past couple of weeks from the soda. Me. Now I haven't been able to put any weight on in a year. I didn't gain any extra over the recommended weight gain when I was pregnant with my last child, so I dropped it all (and a few extra pounds) immediately after she was born. And I have not put it back on. I am actually 2 sizes smaller now than I was the day I got married almost 9 years ago.This is thanks to eating an all Dairy free diet (and having 3 kids to chase around!) But it was eye opening to see that just 1 soda a day for a couple weeks actually caused me to gain weight. The only change to my diet has been the soda. But it is still so very hard for me to give it up. I've tried several times. And I justify my having it by reminding myself that I've already had to give up so many of my favorite foods, so why give up more? But the answer to that is easy- because it's not good for me. So I am going to try to really give it up (FOR GOOD). There are still a few cans left in the fridge in the garage but I am pretending they aren't there.

Yesterday afternoon I really wanted a soda. REALLY REALLY BADLY. But instead of reaching for one of these: 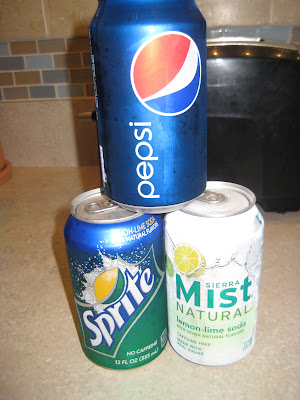 I reached for this: 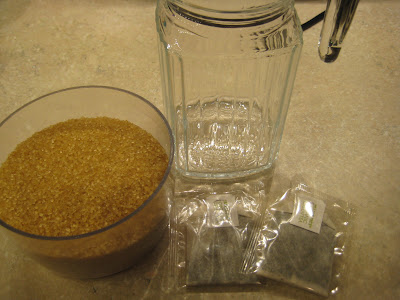 And I brewed up some fresh iced green tea for myself.
Since I have this nifty electric tea kettle it takes a fraction of the time to boil water. 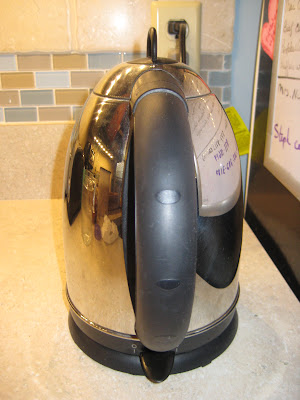 I like my tea strong (even my green tea) so I used two tea bags of Trader Joes Organic Fair Trade Green Tea- in a small pitcher I have. Since I was craving something sweet, I added 1 tablespoon of raw cane sugar to the hot tea. 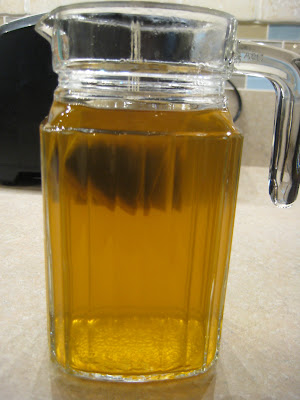 Instead of grabbing a soda, I had a nice tall glass of this: 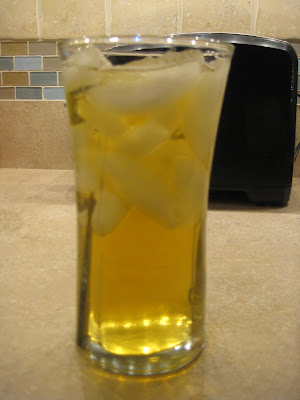 Hopefully I can keep this up! I am determined to give up soda once and for all- but bad habits are hard to break. The occasional root beer is exempt from this- I do like a root beer float about once a year:-) Pepsi and Coke are my vices and those are the ones I have to give up for good.

Do you have a food vice that you are trying to give up?
Posted by Steph at 2:21 PM