Our Second CSA Delivery (And an Easy Stir Fry Idea)

Every Wednesday from now until the end of September we will be getting a bag of fresh, local veggies from Clayhill Farms CSA. 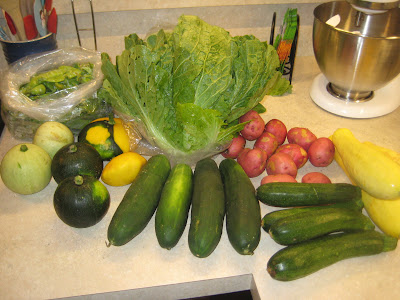 As I was putting away all my veggies last night, I decided to use some of them to make myself a stir fry for dinner. We're trying to do a meatless night once a week, and last night it worked out perfectly. My husband was on his way back from a meeting, so I was just cooking for myself (the kids had already eaten). I love when I get to cook for myself- it's a great time to experiment and make things up. I followed no recipe, just grabbed a few items from my fridge and spice cabinet and went to work.


I used:
a handful of snap peas
1 small zucchinni
1 small yellow squash
1 small patty pan squash
3 large leaves of bok choy
a quarter of one of the huge onions we got last week.

All the veggies used were from our CSA. 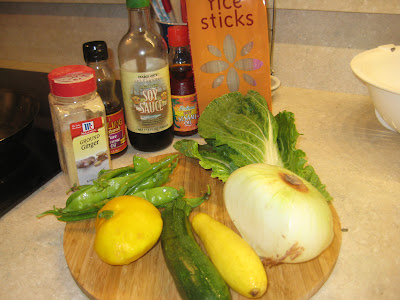 What I did:
1.I boiled the snap peas first for about 2 minutes in order to soften them a bit before adding them to the saute pan. 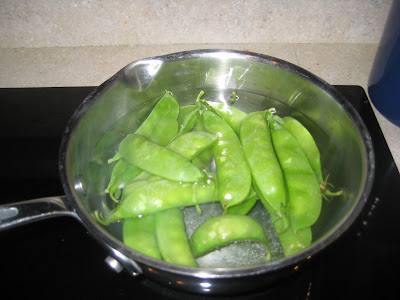 2. First I lightly sprayed my pan with non-stick spray. I find that this really helps prevent sticking, even if using other oils. I heated about a 1/2 tablespoon of sesame oil in th pan and added the chopped onion. I let them cook until they were starting to become translucent.
While they were cooking, I cut my zucchinni and yellow squash into sticks, and cubed my pattypan squash.

3.I added the squash to the pan, along with a little soy sauce and ginger, and let them cook until the squash started to soften. 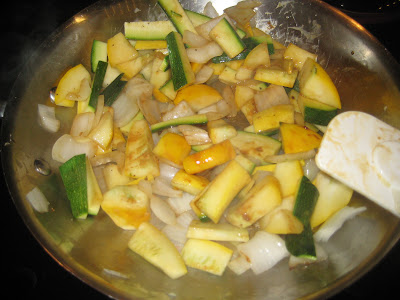 4. I added the snap peas, the hot sesame oil, and a little more soy sauce and let them cook for a couple minutes, stirring frequently to make sure nothing stuck to the bottom of the pan. 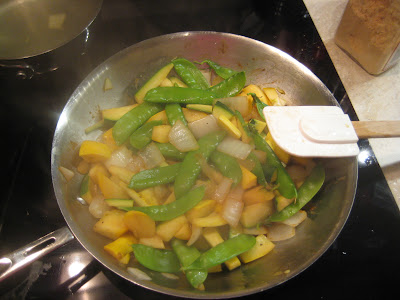 5. While all of the veggies were cooking, I was also getting my rice noodles ready. Somewhere in that time I also added a splash of lime juice and a couple shakes of rice vinegar to the veggies. Like I said, I was making this up as I went along and adding things I thought would taste good.

6. At the very end, I added the bok choy- since it cooks fast. 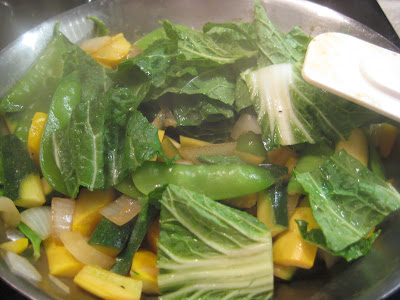 7.Once the noodles were cooked, I drained them and added them to the pan along with a little more soy sauce. I basically added small amounts of soy sauce as needed, when the mixtured started getting too dry.

I was so hungry that I actually started eating this out of the pan! Since it was just for me, and I was doing at least 3 things at once, - answering the phone, putting the baby to bed, getting the big kids in their jammies- I just grabbed a few quick bites before I actually had a chance to put some in a bowl for myself. 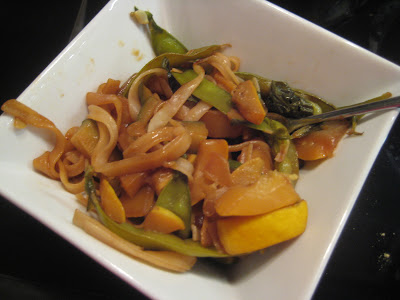 It was an easy, filling, quick weeknight dinner, perfect for one person, or a family. Since I was making it for myself, I did make it spicy. But if my kids were going to eat it I would have cut out the hot sesame oil.

I highly recommend joining a CSA in your area if possible. We absolutely love ours! If you live in the Tidewater region, our Clayhill Farms CSA has open enrollment througout the summer, so we are still accepting registrations. Clayhill Farms also offers a Fall CSA that runs until the Holidays. It is most definitely worth every penny!

Happy Cooking!
Posted by Steph at 9:41 AM